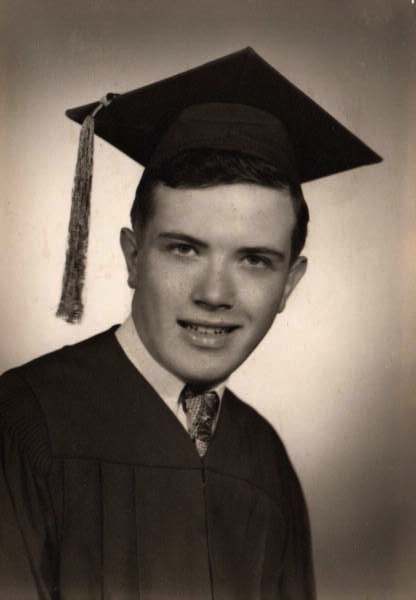 Am I My Brother’s Keeper?
(Speech Transcript)
By Alan Doshna

Although this is not really a sermon or about how we came to be on earth, I would like to quote several verses from the book of Genesis in the Bible:

I don’t know about you, but it seems to me that our great, great ancestor Cain would feel very comfortable in our early twenty-first century.  Since I don’t believe that this is in anyone’s favor, I would like to offer an alternative to encourage and to inspire you.

When my mother had been married for about 20 years, there had been problems which came to the surface in the marriage.  She met a man who saw that and took advantage of the situation and eventually as it turned out, she left her husband for him.  She would have two sons by him, of which I am the youngest.  My mom already had two sons around their early 20’s.  They loved my brother and I like we were full brothers, showering us with attention and giving us gifts, even though we were the sons of the man who broke up their family.

As time went on, my father decided that he didn’t want the responsibility of the family that he took on and eventually he left my mother without any monetary, or any other kind of support.  But my oldest brother Don, who was still single decided to take us in and support us from then on.

Around the time I was 9 years old, Don received a promotion at his job at the Small Business Administration which required that we move from the New York City area to Syracuse in upstate New York.  There we enjoyed a standard of living that would never have been possible even in the best of circumstances with my father.

Don gave me many things: I had braces in my teeth, he sent me to college and other things that some, perhaps many natural fathers wouldn’t have done for their children.

I remember on one night when we were having supper, we were kind of joking around and the Paul McCartney song Yesterday came on the radio.  Don began singing to it, word for word, throwing himself into it in a way I had never seen him do before or have seen him do since.  From that point on, in the eyes of our family, Don OWNED that song.  We’d always kid him about it when it came on the radio.  But looking back many years later I can better understand how he could relate to the words of that song:

“Yesterday
All my troubles seemed so far away
Now it looks as though they’re here to stay
Suddenly, I’m not half the man I used to be
There’s a shadow hanging over me
Oh I believe in
Yesterday

Here was a young man, single, just coming into the prime of his life and the peak of his career who voluntarily took on such a burden from which there was no turning back.

I suppose there are two things that parents fear that their children might do when they become older:  One is that they might join a religious “cult.”

The other is that they might pursue a career in acting.

Well, I did both!

My only regret is that I could have handled both situations a little better.  You see, when I became a member of this church, my life kicked into high gear in a way that it never had before.

So I moved out to California to pursue my heart’s desire.   Even though my mother and brother didn’t agree with me on it,  yet they still supported me in many ways, not the least of which was, on occasion, financially.

And I know that there were probably many evenings when my brother Don, who had no one to support him in the same way, would console my mother as to why her youngest son, her “baby” would move so many miles away from his family, which she could never understand.

And after my mom passed away, I expected the relationship and generosity to stop there or greatly diminish, but again, more times than I would rather it have been necessary, he was there for me.

I just want to share with you the most Christ-like example of unconditional love, commitment and forgiveness that I have ever seen or experienced.

Some might disagree with me, but I think my brother Don is a better role model than Cain.

I am also speaking to my self here.  I am not there yet either.

But I do know that if in this life there is any good that I can add to this world, that it wouldn’t have been possible without my brother Don.

And although I’ve been around for a while, I’d like to think I’m just getting started!

If you have been to a Toast To The Best meeting in the past couple of months, you probably are aware that one of our new members, Al Doshna, was our representative in the Area A-5 International Speech Contest.  We first heard Al’s speech about his oldest brother’s sacrificial care for his Mom, his brother and Al when Al’s dad left them without financial or emotional support.  We agreed that Al should represent us, but he needed to have completed six speeches in his CC manual before he could be officially selected.  Al practiced his speech for credit in two other clubs, as well as in Toast To The Best and he was ready. The contest was held on Saturday.  Linda Kersey, Joan Haase, AK Patel and I were there in addition to Al.  The contest featured the best from area A-5 clubs competing against each other, and the best from area A-4 cubs competing against each other.  The winners for each area will compete on May 9th in the Division A contest.  Al presented his speech better than I had ever heard it before.  People in the audience were rapt in their listening.  When the winners were announced, the new guy did not win first, that went to a much more experienced Toastmaster with an excellent speech in its own right.  Instead, Al, giving only his seventh Toastmaster speech, was awarded first runner-up.   You should have been there.  I am so proud of Al.  Unofficially, I think his speech was every bit as good, and as well presented as the winner.

If the winner is unable to represent A-5 on the 9th, Al will be asked to step in as contestant.  So you will want to attend the dinner and contest.  The cost, if I heard correctly, is $15 for Toastmasters, $5 for non-Toastmaster dates.

The winners from the other areas promise to be good, and the A-5 speaker had to be great.  After all, he beat Al, albeit narrowly (IMHO).  There will also be a Table Topics contest, with the winners from the five area contests competing against one another.